BTS Opens Up About The Importance of Loving Yourself - ONkpop.com - Breaking K-pop News, Videos, Photos and Celebrity Gossip

Home Boyband BTS Opens Up About The Importance of Loving Yourself

BTS Opens Up About The Importance of Loving Yourself 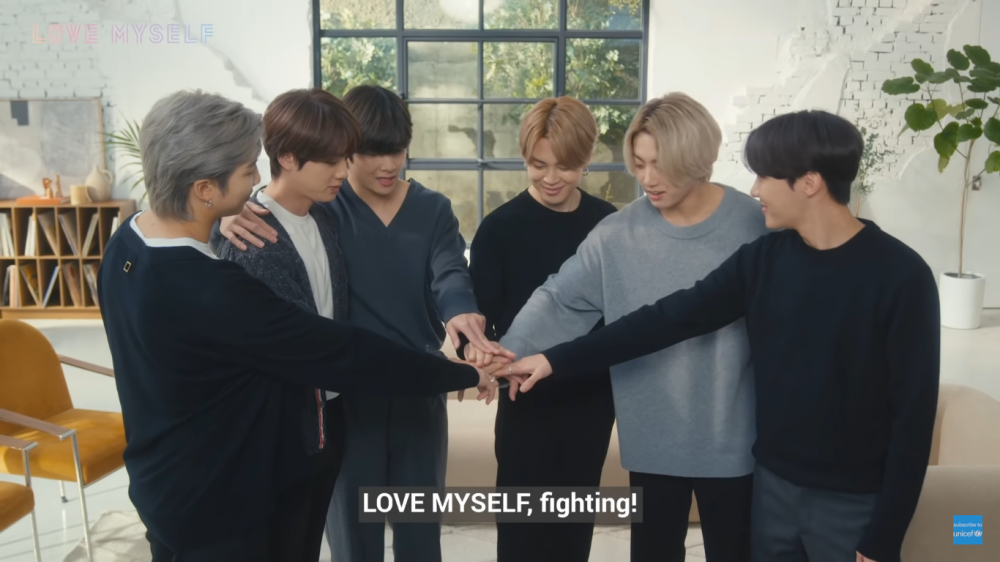 UNICEF Korea has just announced that they have renewed their cooperation with Big Hit Entertainment and BTS. As part of their 'Love Myself' campaign, they talk about loving themselves.

In the released video, BTS took the opportunity to talk about the message behind their 'Love Myself' campaign, which was launched in 2017. The members also talked more privately about how much impact the campaign will have on their own personal lives.

The leader RM began by saying how much he believed the campaign had an impact not only on his life but also for the rest of the members. Jin reflects on the sentiment emphasizing that he believes he should be the first to join the campaign and share how much he has grown.

"I have to start by loving myself more and always keeping self-love at the forefront of my mind. It helps me to understand how precious the people around me are," said Jin.

In the interview, BTS' Jimin spoke honestly about the differences he saw in himself before and after the campaign started. He initially thought the campaign was for those around them but quickly saw the change taking place in him.

"Before the campaign, I just thought that I would rather see genuine joy than a forced smile or tears. Now, I ask myself if my smile is sincere too," he said.

V also mentioned how important the campaign is to his personal relationships, saying, "I realized how much love I received, and it made me love myself more and love others more."

More importantly, the members kept repeating the idea of ​​self-love. J-Hope and Jungkook emphasized that the campaign has helped them reflect on themselves and learn to love who they are.

Jungkook concluded with a few words about his happiness when fans told them how positively the campaign had an impact on them. Even though Suga was not present, RM explained that he shared the same sentiments and wanted to repay his fans' love. (www.onkpop.com)