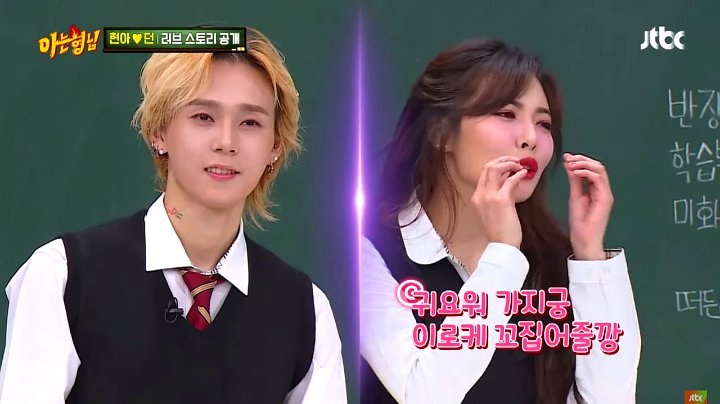 JTBC has aired the latest episode "Ask Us Anything" on Saturday (9/11). This episode presents beautiful singer HyunA and DAWN as guest stars.

On this occasion they talked about many interesting things about their relationship. They revealed a variety of sweet moments they had gone through as couples.

When HyunA was asked if she had ever been angry with DAWN, she didn't dodge it. However, DAWN always says and does sweet things to quell her anger so they don't fight.

"Yes, I have. I say words like 'Everyone always says I like you more (than you love me).' But because he is so affectionate, when there is no camera he bothers me a lot. He started talking in a cute voice, doing so much aegyo and he filled me with kisses," HyunA said.

Kim Heechul then asked what they had eaten before. But suddenly HyunA interrupted, "What should we eat later?", then DAWN replied "I'll eat whatever HyunA wants. Then it tastes good,".

Heechul also asked them what the call was for each other, if DAWN called HyunA noona, considering she was older. Responding to this question, HyunA responded sweetly, "Honey," she said.

Meanwhile, HyunA and DAWN are currently busy with their various promotion activities. Because some time ago they comeback in the same time. (www.onkpop.com)
Add your comment