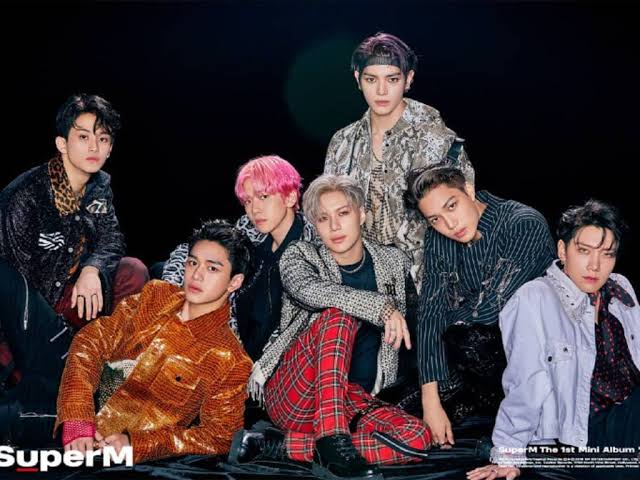 Along with their debut, the members had undergone promotional activities in the United States. At that time SHINee's Taemin, EXO's Kai and Baekhyun, NCT 127's Taeyong and Mark Lee and WayV's Ten and Lucas held a showcase and performed live in front of fans.

"It was a great time," Mark recalled the moment of their showcase in an interview with Pop Crush, which was published recently. "It was the first time we appeared as a team in front of our fans and it was like a new experience. We all felt the same emotions."

"I think that's what really impressed me," he continued. "Last night we were all nervous, We warmed up together. Things like this made us feel like a whole team. We felt strong."

"We really feel very, very nervous about this performance," Taeyong added. "We want to show a lot of things to fans because it was the first time we performed as SuperM. Because of that, a part of me wished I could show more. So I hope I can show off many more things next time."

In this interview, the members were also asked when they last heard about SuperM. The older members apparently heard it earlier than the younger ones.

"A year ago, but at that time our younger members didn't know," said Baekhyun. "I heard about SuperM when NCT 127 was on tour, this year. I only found out a few months before preparation," said Mark, who was agreed by Taeyong.

When asked what their first reaction was when they heard about SuperM, they compactly answered, "Wow!" while Mark said, "I actually wanted to say this. During our first filming together, I went to Taemin's room and I asked him, 'What did you feel when you first heard about SuperM?' He actually said, 'This is actually something that can only happen now'."

"I totally agree with him," Mark continued. "That is something the world never thought they needed, but now they will know that they need it once we come out. We have prepared many things and we are ready to show why we came and why we are SuperM." (www.onkpop.com)
Add your comment