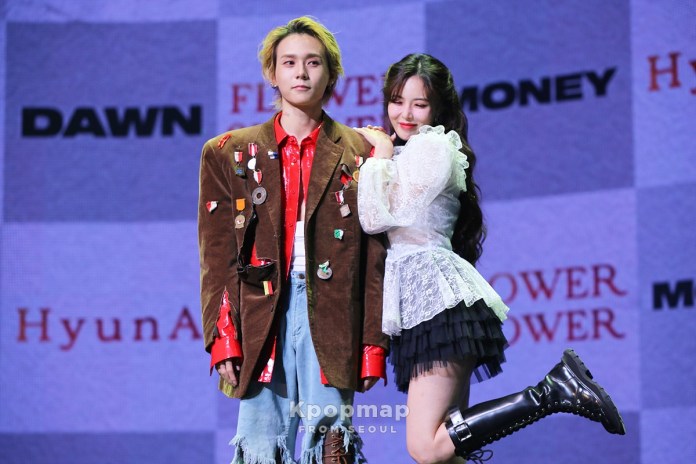 On Tuesday (11/5), "Night of Real Entertainment" aired the latest episode. This episode airs an interview with the beautiful singer HyunA. Her presence is also to promote her new solo song entitled "Flower Shower".

On that occasion HyunA also discussed about her love journey with DAWN. As you know, they have been dating since May 2016, but announced their relationship in August 2018.

HyunA then explained the reasons she and DAWN announced their relationship to public. "I feel very sorry and thankful. But, that's why I can get strength. I think I'm selfish. Even though I've been doing promotions for a long time, (DAWN) hasn't (promoted for a long time) and therefore (we) have become more careful" she explained.

When HyunA was asked about the charm of DAWN, she looked blushed. Nevertheless she finally revealed the sweet side of her lover that made her fall in love.

"He is a little foolish but has a gentle nature. He does not have a big appetite, but always eats good food with me. And what I like the most is we always share music and art together," she explained.

HyunA was also asked about who first revealed the feelings of love. Responding to this question, HyunA unashamedly revealed that she liked DAWN first.

"I confessed my feelings first. I've liked him for a long time. So I waited and carefully told him that I liked him. And suddenly he said, 'Let's start dating'," she said.

Meanwhile, HyunA and DAWN have officially made their comeback as solo singers on Tuesday (5/11). HyunA appeared cheerful in her solo song MV "Flower Shower" while DAWN performed the artistic MV "Money".

Their comeback as a solo singer is reaping a positive response from many people. Because not a few people who like the concepts and songs they bring. (www.onkpop.com)