Recently, a co-ed pop group in Mexico shocked K-Pop fans. The group with name Crystal Krush was known have copy the concepts, music, and style of the co-ed group made by DSP Media, K.A.R.D.


This group has 2 female and 2 male members, same as K.A.R.D. Not only that, this group also uses a similar concept with K.A.R.D by using five cards that suit each member to promote their group.

Fans noticed that the group not only copied K.A.R.D's style but also the music and choreography. Most of the songs featured in Crystal Krush promotional videos not only sound similar but are exactly the same as K.A.R.D but with a different language.

Fans have tried asking for an explanation from the Crystal Krush agency. However, Crystal Krush's management announced that they have a good relationship with DSP Media and were authorized for the group's concept and music.

DSP Media responded quickly by stating that their statements were false. DSP Media finally announced that they would take legal action against the group because of the unauthorized use of K.A.R.D.'s creative content and concepts. Following are the contents of DSP Media's official statement.

"Hello. This is DSP Media. Recently there has been a problem where K.A.R.D's songs, performances and creative content have been used without authorization."

"We want to emphasize that DSP Media never authorizes any foreign group to use K.A.R.D concept and content. In addition, DSP Media has not collaborated with any foreign management to modify, borrow, or use K.A.R.D. concept."

"We plan to take legal action to the plagiarism case against KARD so far. In closing, thanks to everyone who likes K.A.R.D.'s music and performances."
Since clear clarification from DSP Media, all Crystal Krush official accounts have been removed from all traces. All group member accounts are also deleted. (www.onkpop.com) 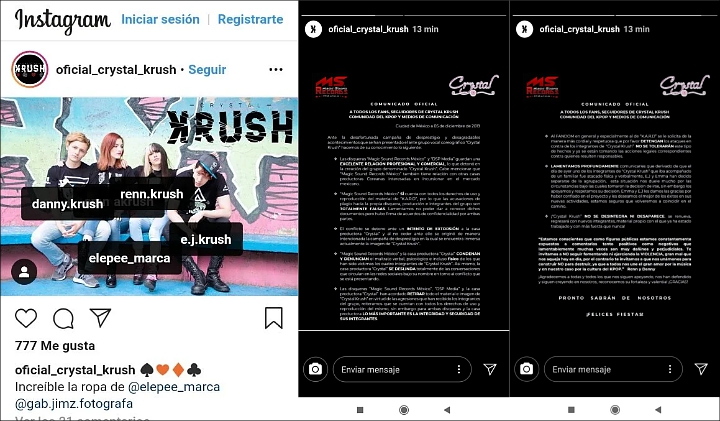